A simple gold Bitcoin that cost the anonymous owner just $4,905 back in 2011, is an incredible return on investment

Recently, the owner, who remains anonymous, spoke with GreatCollections Coin Auctions of Irvine, California, to help with appraisal logistics for the coin. GreatCollections submitted the BTC coin with an armored detail to get certified by Professional Coin Grading Service. Recently, the coin has been certified PCGS PR70DCAM (Proof 70 Deep Cameo).

Currently, the Bitcoin community has referred to the 1 oz gold Bitcoin as “the Gold Cas”, named the company that produced the coin, “Casascius”. Mike Caldwell, the founder of Casascius, was in the business of creating a series of “Casascius coins” in various denominations, with only six BTC Cacascius coins created.

What Makes this Coin so Valuable?

In addition to the “Gold Cas” beauty, the coins were designed to represent the amount of an account and features. Also, they function as secure containers. First, the coin holds digital keys to the assigned value of the owner’s bitcoin account. Second, an eight-character code on the coin mimics the eight characters of the owner’s bitcoin address, specifically assigned to that coin. Lastly, embedded on a card, are the owner’s “private keys”, which were placed inside of the coin.

Mike Caldwell minted the first Casascius with  “2012 CASASCIUS”. The obverse includes “1 TROY OZ .999 FINE GOLD”. The inscription says, “VIRES IN NUMERIS,” which is Latin for STRENGTH IN NUMBERS. A tamper-resistant multi-color hologram design is on the reverse. 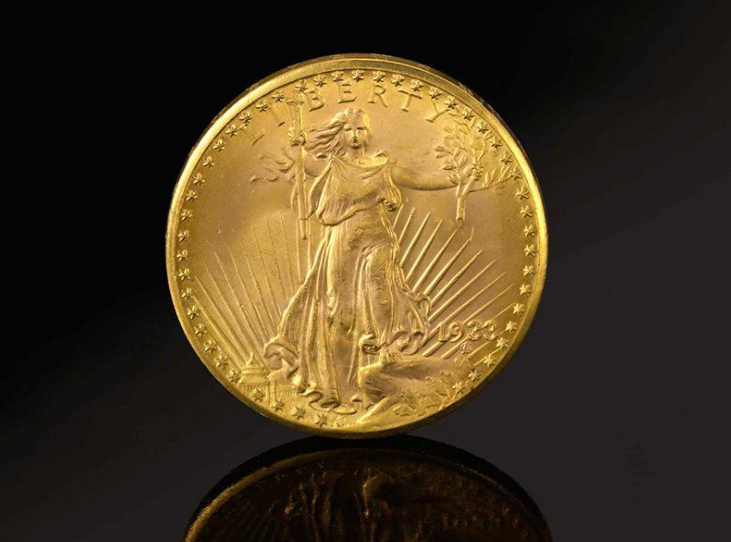 Is it for Sale?

The owner is optimistic about Bitcoin’s future and does not plan to sell the coin. GreatCollections deposited The ‘Gold Cas’ to an overseas bank vault.

GreatCollections will currently offer a gold-plated 25 BTC coin,  certified PCGS MS67, at auction without reserve. The auction will close out by November 14, 2021.

BTC passed the $50,000 mark for the first time in four weeks on Tuesday on mounting institutional interest. The current total value of bitcoin in circulation is worth more than $1 trillion. Surpassing the value of Facebook. The value of all cryptocurrencies in circulation matches Apple at $2.3 trillion.

Seeing as Bitcoin is headed toward its highest recorded price of $64,863, he might be right. We might continue to see the ‘Gold Cas’ coin breaking its record for many years to come.