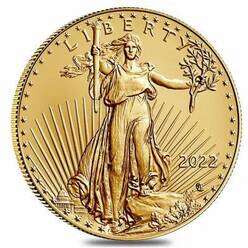 Purchases of American Gold Eagles soared in May according to recent data released by the US Mint.

American Gold Eagle investors purchased 147,000 ounces in various denominations tallying up to 200,500 coins, up 67% from March.

The US Mint sold 661,500 ounces of American Gold Eagles so far this year.  That is a 617% jump from last year. This seems to be an ongoing trend; after factoring out pandemic disturbances, sales increased 400% for the 5-year average between 2015 and 2019.

Why the Spike in Demand for American Gold Eagles?

Market insiders believe that the spike in bullion demand stems from an increased fear of the economy’s future. Many analysts are predicting a recession, which is prompting many investors to reset their portfolios by dumping stocks and bonds in favor of precious metals.

Will the Demand Continue its Current Trend?

Some market analysts believe that the recession has already started. Several investors like Michael Burry and Peter Schiff (who predicted the 2008 housing market crash) indicate that this recession will be the worst recession to date.

As the stock market falls deeper into the red, demand for gold continues to surge. Most media outlets have failed to report the massive shift toward gold investments. Instead, they focus more on the gold paper market while ignoring the movement of physical precious metals.

The interest in bullion investors buying physical gold and silver is focused on the Fed’s policies to fight against inflation, while institutional investors are more concerned with the fallout of how the Fed is fighting inflation. This is why you see the markets reacting in an unpredictable manner.

Many institutional investors still have faith in the Fed’s ability to combat high inflation rates. But as time goes on, many are fleeing from traditional securities and turning to gold instead.

Market insiders believe that the Fed is limited in its options for managing inflation and the stock exchange. If the Fed raises interest rates to effectively challenge inflation, the US would face massive interest on top of its already record-breaking budget and trade deficits.

In brief, American Gold Eagles are a great investment. The popularity of the coin creates an added opportunity for investors looking at turning a quick profit.

As inflation continues to rise, it is difficult to forecast if the demand for American Gold Eagle coins will subside. If you have the opportunity to invest in gold right now, you too should consider purchasing as many American Gold Eagles as you can.